Ethiopia is the largest producer of Faba bean in world next to China. Faba bean is valuable as the cheap source of protein in most Ethiopian diet. However, the productivity remains far below the crops potential. Disease is the major treat to production in Ethiopia. Survey was conducted in Sidama and Gedeo zone highlands of Ethiopia during the 2016 cropping season to determine the prevalence, incidence and severity of faba bean chocolate spot (Botrytis fabae Sard.), rust (Uromyces viciae-fabae) and ascochyta blight (Ascochyta fabae) in major growing districts, and the influence cultural practices on faba bean disease epidemic. A total of 49 faba bean fields were surveyed in four districts. Sample plants were systematically selected in an “X” fashion. In each field, five plants in 1×1 meter quadrant were sampled for disease assessment. During the survey, altitude, cropping system, planting pattern, crop growth stage and weed management practices were recorded. The overall mean prevalence of faba bean chocolate spot, rust, ascochyta blight were 100%, 58.5%, and 33.8%, respectively. Significant differences among districts were showed with respect to chocolate spot, rust and ascochyta blight incidence and severity. The districts varied in incidence and severity of chocolate spot. The mean incidence of chocolate spot varied from 60.0% in Hulla to 100% in Melga, while severity varied from 37.7% in Dara to 50.0% in Bulle district. The mean incidence of the rust varied from 22.0% in Bulle to 58.3% in Melga while severity varied from 16.6% in Bulle to 42.2% in Dara district. The mean incidence of the ascochyta blight varied from 3.3% Melga to 45.8% in Hulla, while severity varied from 14.8% in Melga to 37.7% in Hulla district. The survey was identified cropping system, growth stage, planting pattern and weed management as important variables that influenced faba bean disease epidemic. The result indicated that mixed cropping system resulted in less chocolate spot severity. Fields having good weed management score showed the lowest incidence and severity of rust as compared to their respective other variable classes. Maximum severity of ascochyta blight recorded in where faba bean was at broadcast. The survey revealed high prevalence and distribution of faba bean chocolate spot, rust, ascochyta blight in the study area and the need for effective and feasible management options to be developed. 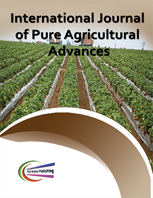